“That the Subjects which are Protestants may have Arms for their Defence suitable to their Conditions and as allowed by Law. ” – English Bill of Rights, 1689

“A well regulated militia being necessary to the security of a free state, the right of the people to keep and bear arms shall not be infringed.” US Constitution, 2nd amendment, 1791

Your homework this week is to compare and contrast these statements from English and American statute.

Last night’s The Ascent of Woman (BBC2) did a fine job of demonstrating how the recent trend for monotheistic religions (Judaism, Christianity, Islam being the main ones) merely inherit a somewhat older tradition of patriarchy.

The systematic oppression of women for which they have become famous, a system of male domination, of our very discourse, imagination, as well as politics and ethics and law, in short of society ‘itself’ in fact seems to have emerged with the transition to settled, agricultural civilisation, itself a fairly recent innovation in human affairs. END_OF_DOCUMENT_TOKEN_TO_BE_REPLACED

, which I read last year when the world was a different place. I remember thinking, in that phantasmagoria we call 2014, that while I wasn’t convinced at all by Professor Bloom’s application of his firm stance against the false guide ’empathy’ in the political sphere, on the everyday personal and/or professional sphere his argument seemed more solid. I especially liked the importance of the distinction between ’empathy’ and ‘compassion’. The article didn’t disappoint when Buddhist practitioners appear, their brains being scanned by psychology labs to find out what conscious compassion looks like, as brain data.

Geneticist Steve Jones once pointed out how the nature/nurture debate can rest on the unsafe assumption of a clear dividing line between genes and environment. This exciting new research reported in the Grauniad seems to make this point even more relevant. Moreover, scientific orthodoxy looks very much subject to revision and change in its light, as the pro-science lobby would argue.

According to the quoted words of the researchers, this research represents the first evidence of “epigenetic inheritance” – that environmental modification of our genes can be inherited.

I’m finding it a really exciting report that changes the way we think about our lives.

“It would certainly prove nothing as to what part I might have taken had I lived during the great controversy of 1776. To say now that America was right, and England wrong, is exceedingly easy. Everybody can say it; the dastard, not less than the noble brave, can flippantly discant on the tyranny of England towards the American Colonies. It is fashionable to do so; but there was a time when, to pronounce against England, and in favor of the cause of the colonies, tried men’s souls. They who did so were accounted in their day plotters of mischief, agitators and rebels, dangerous men. To side with the right against the wrong, with the weak against the strong, and with the oppressed against the oppressor! here lies the merit, and the one which, of all others, seems unfashionable in our day. The cause of liberty may be stabbed by the men who glory in the deeds of your fathers.”

So the story goes, as was revealed some years ago now, that Dennis Potter, a television script-writer with a staggering reputation, once submitted a script, storyline, or at least an idea to Doctor Who during the early years of the show.

It makes sense. Potter had flirted with writing for TV in the years immediately before Doctor Who began, but it wasn’t until the series became established, around 1965, that Potter settled on writing television drama as a viable career. Potter did not in the event contribute to the series, instead making a name writing inventive and emotive single dramas for adults, such as Where the Buffalo Roam, and Son of Man, before going on to make several towering contributions to television drama in the seventies and eighties.

So what is the the great lost Dennis Potter Doctor Who story about? Legend has it it’s about a schizophrenic, a delusional who hallucinates or believes himself to be a time-traveller. How modern, how very Potter to take something fundamental to the series format and twist it in such an interesting way.

What would happen if such a person met ‘real’ time travellers? What would happen to such a person if they ‘really’ get to travel in time? What kind of dramatic journey does that entail? What does that do to a character? What does that do to the audience? Thinking about it it undermines, in interesting ways, the very core of the programme. In Doctor Who, how can we be sure an hallucination of time travel remains just an hallucination; how can mental time travel be just a delusion in Doctor Who?

Time travel has always been possible in dreams.
Madame Vastra, The Name of the Doctor

And if that is true, how can we be sure of anything? Perhaps the Doctor himself is just a very advanced type of schizophrenic whose delusions and hallucinations have somehow become his physical milieu? 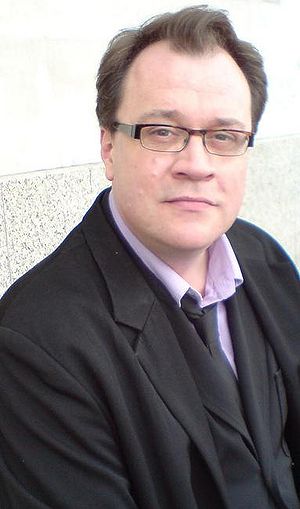 Potter’s ghost remains an influence on the series. Certainly Russell T Davies was influenced as a writer by Potter. And when considering some of Steven Moffat’s ground-breaking work on the series, I think of the brilliant conceit in his 2008 episode Forest of the Dead, in which a character begins to realise she’s trapped in a virtual reality because she notices the edits in the television drama programme she’s in. I almost can imagine Potter thinking: I wish I’d thought of that.